Growth hormone deficiency (GHD) is a medical condition that results when the body does not produce enough growth hormone (GH). Growth hormone is a protein hormone that is essential for normal growth and development. GH is produced by the pituitary gland, a small gland located at the base of the brain. GH plays an important role in regulating body composition, bone and muscle growth, fat metabolism, and sugar and lipid (fat) metabolism. GH also helps to maintain the health of organs and tissues throughout the body. Low growth hormone deficiency, often known as GH deficit, is a medical disease that accelerates the aging process by diminishing energy production and vitality, affecting muscular function by slowing cell recovery, regardless of whether you exercise or not. GHD can occur at any age, but it is most common in children and adolescents. GHD can cause a wide range of problems, including short stature, poor muscle development, and increased body fat. GHD can also lead to other health problems, such as osteoporosis (a condition in which the bones become weak and break easily), high cholesterol, and cardiovascular disease.

Sermorelin is a growth hormone-releasing factor (GRF) that stimulates the natural release of growth hormone from the pituitary gland. Sermorelin is a peptide that is similar in structure to the GH-releasing hormone (GHRH), which is a hormone produced by the hypothalamus that regulates GH secretion. Modified GRF (1-29), or modified growth releasing factor with amino acids 1 to 29, is the name given to sermorelin. When these releasing hormones in the pituitary gland were normalized, researchers discovered that GH deficit naturally increased. Sermorelin stimulates the generation of GH via binding to the growth hormone-releasing hormone receptor (GHRHR) on cells in the anterior pituitary. Sermorelin, unlike HGH therapy, does not suppress HGH production naturally. Sermorelin aids in the normalization of GH levels when the body’s IGF-1 levels are below normal.

Why having a balanced level of IGF-1 is crucial?

A decrease in IGF-1 levels is one of the first changes that occur in the body during the aging process. IGF-1 is a hormone that helps to control cell growth and repair. It also plays a role in regulating metabolism. The decline in IGF-1 levels that occurs with age can lead to a number of health problems, including frailty, osteoporosis, and an increased risk of heart disease. Maintaining appropriate levels of IGF-1 can help to halt the aging process by preventing premature aging of the skin and other organs. In contrast, low levels of IGF-1 cause cognitive decline, an increased risk of heart disease, weakened grip strength, and immune system. IGF-1 also impacts fibroblast function (cell formation), which tells the body to release enzymes to break up and remove dead skin, then manufacture collagen to replace it with new skin. Because cardiac stimulation of the IGF-1 receptor protects patients against heart attacks, IGF-1 deficiency can raise the risk of cardiovascular disease. Through their tyrosine kinase activity and connection to a heterotrimeric G protein, these receptors activate pathways. Simply put, IGF-1 aids in the production of a healthy blood plasma membrane and the maintenance of cell structure in the arteries of the heart.

GH deficiency treatment involves replacing the missing GH with injections of synthetic GH. This can be done either by subcutaneous injection (under the skin) or intramuscular injection (into the muscle). GH replacement therapy is usually started at a low dose, and the dose is gradually increased over time until the desired level is reached. The dose and frequency of GH injections will be different for each person and will depend on factors such as age, weight, and the severity of the deficiency. Adult GH replacement has been shown to have considerable positive impacts in research investigations. Total body fat, particularly fat around the abdomen, is reduced when GH is treated. It also boosts strength and exercises tolerance by increasing lean body and muscle mass. Muscle aches, joint soreness, headaches, edoema, and inflammation are all common adverse effects. Because everyone’s body reacts differently to GHRH therapy, doctors don’t adopt a cookie-cutter approach to treatment. While side effects require attention, most patients report that they go away as their bodies acclimate to the medication. However, a rapid reduction in sermorelin dose with experts’ guidance is usually the first step.
Find Out How We Can Help
Tags:
Anti-Aging, GH deficiency treatment, Growth hormone, Hormone, Hormone Deficiency, IGF, peptides, sermorelin
Newer Creatine and Low Testosterone Treatment: 3 Life-Changing Benefits for Average Adult
Back to list
Older What is Telehealth and Telemedicine – Guide for Absolute Beginners on Virtual Medical Visits 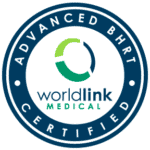 🏠 Stay at home! Free Shipping on all US Shipments